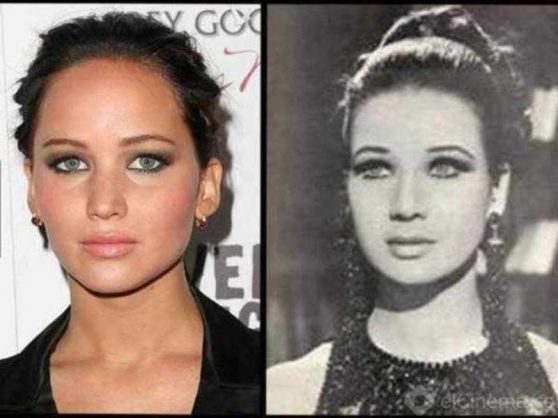 Jennifer Lawrence and Zubaida Tharwat Jennifer Lawrence, Queen Latifah, Alicia Keys, Oprah, Leonardo DiCaprio, John Travolta, Ellen DeGeneres. Other than being rich and famous, what do they all have in common? They all have historical doppelgängers! That's right. all of these famous people, celebs, Hollywood stars, whatever you like to call them, look just like people in old photos. From George Washington or an old Pope, to your average random 19th century gentleman, these celebrities all have doppelgängers in historical photos, if you look closely. Some of history’s twins were famous in their own lives, while other languished in obscurity. There’s photographic evidence of the some, and only a painting or sculpture of others (hey, those were based on real people too, right?) Some of these famous doppelgängers in old photos have a few features similar to those of the world's biggest celebrities (Bruce Willis and General Douglas MacCarthur have the same eyes, for example), but others are dead ringers for today’s stars (are Nicolas Cage, Keanu Reeves, and Peter Dinklage vampires or time travelers?). Check out this list of celebrities who look like people from history and celebrity twins from a different time and vote up the historical lookalikes you think resemble each other the most.