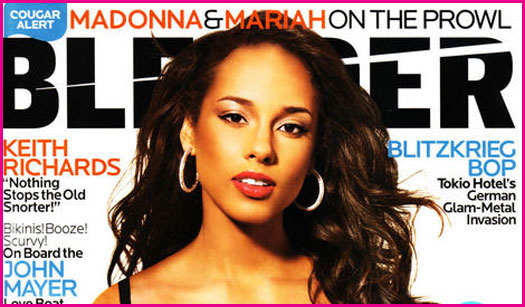 Most celebrities are surrounded and coddled by a pit crew of PR people, because most celebrities in real life are mentally unstable basket cases who are so painfully oblivious to reality that they need constant supervision. Otherwise, they agree to be interviewed by Blender Magazine and say stuff like this:

The Grammy-winning singer-songwriter tells Blender magazine: “‘Gangsta rap’ was a ploy to convince black people to kill each other. ‘Gangsta rap’ didn’t exist.” Keys, 27, said she’s read several Black Panther autobiographies and wears a gold AK-47 pendant around her neck “to symbolize strength, power and killing ’em dead,” according to an interview in the magazine’s May issue, on newsstands Tuesday. Another of her theories: The bicoastal feud between slain rappers Tupac Shakur and Notorious B.I.G. was fueled “by the government and the media, to stop another great black leader from existing.”

Hmm, I may have to go back and listen to my Ice-T CDs again, because I’m pretty sure he said something about a Mac-10 and killing cops. And I might be mistaken, but I don’t think NWA was originally a vocal harmony group before they caved in to government pressure. Man, it must be nice to be like Alicia Keys and read something then instantly believe it’s true. That would be cool. *Closes “Clifford’s Big Dig”* Clifford, he’s a big red dog! OMG, can you believe it?!